Problem with fur growing back

I have a medical issue to run by the group.

Maggie, my four-year-old English, had surgery on her leg five weeks ago. For the surgery, she was shaved from flank to foot. 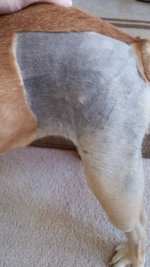 The doc mentioned something about bulldog alopecia. But from the pics I saw online, it just doesn't look the same. She has never shown signs of alopecia before, and the hair on the opposite side is just as thick as it has always been.

The doc also mentioned a possibility of hypothyroidism. But she said other symptoms of that are lethargy and weight gain - and Maggie isn't showing signs of either of those.

Does anyone have any ideas why her hair isn't growing back?

Radar had surgery 3 months ago and most of his hair has grown back except for right in the middle of his back we had a nail trim with the vet tech and thyroid was the first thing she said too. We are do for a blood draw and titer tests so I am gonna have them check his thyroid while we are at it just to be safe

Sent from my SM-G900V using Tapatalk

That is strange and would ask for her thyroid to be checked.

We had a similar problem with Monty after his tail pocket surgery. It took a good 9 months or so to grow back and was very patchy. I was really worried it wouldn't grow back at all in some places because it was completely hairless. I put Nu Stock on it and gave him 3 mg Melatonin. Did it make any difference... who knows. It may have grown back at the same rate without it! His Vet called it Surgical Alopecia and said not to worry about it. He said to try the Melatonin as did his dermatologist. 5 weeks isn't very long so I wouldn't worry yet.

When Castor had his soft palate surgery, they shaved his chest/throat area and I was surprised how long it took to grow back - now I don't remember how long but several months before it looked sort of normal. It felt like velvet for a long time.
OP
A

I did talk to the doc again since I originally posted. She mentioned I might try melatonin. I ordered some from Amazon and should arrive today. We'll see if it does anything.

I have heard Melatonin works for hair loss. Good luck and let us know how it works. They do sell it in any drug store or supermarket also.

How much melatonin do we give them?

Sent from my SM-G900V using Tapatalk

My vet said 3mg a day. The dermatologist said 3mg twice a day (he's a big boy) and to use Natures Bounty as she had heard it works better. I gave him the 3mg though as he was a bit dopey.

Hi there. [MENTION=3078]apogee[/MENTION] I am just reading this post. Jewel had ACL surgery and she too was shaved from flank to foot. Also in November last she was shaved just below her neck for the placement of a Fentanyl patch when she had her bout of pancreatitis. I want to say that it took a few months for all of her hair to grow back especially where the patch was.
You must log in or register to reply here. 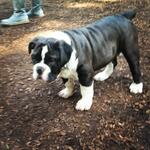 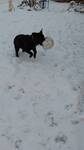 Help Needed! Hair not growing back after surgery
2

S
Mamma sat on puppy and back legs wobbly