Rx Only: Cyclosporine for allergies 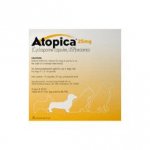 Do you have a bully whose licking, scratching and discomfort is ruling their lives and yours? It might be time to ask your doctor about Cyclosporine.

Once my bully Truman turned 2 years old, I noticed a shift in his behavior. He was obsessed with licking his paws and scratching his skin to the point he would give himself infections and raw areas that needed to be treated with antibiotics and ointment. Despite having Truman on several high quality foods and different proteins, his allergies always persisted to the point he didn't seem like he was happy anymore. Itching and licking ruled his life and ours.

After the third or fourth self-induced skin infection, I asked our vet for options. After speaking to my vet and doing some research I learned a few startling facts and bulldogs (well, all dogs) and allergies. First, only about 10% of allergies in dogs are caused by food. Much like humans, dogs are much more susceptible to environmental allergies than food allergies - so changing the food isn't always the answer. In fact, most of the time, it's not. That said, quality foods provide a multitude of health benefits to your dog, so it's well worth feeding your dog a great food, even if it doesn't cure allergies!

I then figured the next step would be allergy testing, since Truman's allergies were likely environmental. After researching allergy testing on dogs, I found more interesting information. Blood tests, which are the most economical test, are very inaccurate for dogs since they were developed specifically for the human immune system so results are often overwrought with false positives. While skin tests are more accurate, they are very costly, and often reveal allergies to things that are nearly impossible to eliminate from your dog's environment.

Also, very significantly, allergies ARE NOT due to a bad or suppressed immune system. They are caused by an OVERACTIVE immune system, which basically overacts to substances (allergens) that pose no threat to your dog's health.

After learning all of this, I tried Truman on a variety of anti-histamines, including Benadryl, Zyrtec, Claritin, Hydroxyzine and a combination of these medications to no avail. Finally, the doctor told us about cyclosporine.

Cyclosporine treats allergies differently in that it alters the immune system response to the allergens. So instead of overreacting to allergen, it helps the immune system not react at all. It is used in organ transplant patients to help keep their bodies from rejecting the organ so it's long term use has been well documented and is considered safe in the correct dosage.

At first, Truman was taking a capsule every day and now he's moved to every other day, which comes to about $50 every other month. It has eliminated the need for him to take any other kind of allergy medication and has given me my happy, healthy dog back. With the exception of some initial digestive upset, there have been no side effects to this medication at all.

Cyclosprorine is a serious medication and should only be taken for the worst cases of allergies that do not respond to anything else but, if you are living with a dog whose quality of life is poor because of allergies, this could be the answer you've been waiting for.
Last edited by a moderator: Jun 20, 2013

Very good info! I've been noticing Finn itching more, licking his paws , etc..
been trying Benadryl now and he hasn't been allergy tested yet. He's two now so I'm going to see how he does after his bath this week. Hes on a home cooked diet.
Glad to hear that Truman is doing much better now with the cyclosporine .thanks for the information!

I can also vouch that Atopica is a great medicine. I used to manage a kennel of show Golden Retrievers. One of our show dogs had horrible allergies...that poor dog would scratch until she bled and she had constant ear infections. We tried everything and finally ended up with Atopica. It worked wonders for her! She stopped itching, grew all of her hair back, and reduced her ear infections to maybe 1-2 a year. I would highly recommend this drug to any dog with severe allergies.
You must log in or register to reply here. 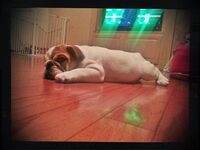 N
What food do you recommend for an English Bulldog Puppy?