Help Needed! New to the breed. Should I be concerned?

To sum it all up in order to get a quick response: is this normal 8 week old puppy behavior or is this a sign of aggression? The EB just met the Goldendoodle. https://drive.google.com/file/d/1AIwIa2a3VtDkEqQtSRONiAT80VfAdn8S/view?usp=drivesdk
If no sound
Https://www.dropbox.com/s/rq6wgaefzhqpxt0/IMG_4924.mov?dl=0 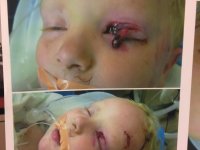 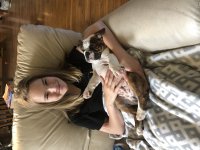 We have had our new puppy exactly a week. He is doing well except for a few things. Potty training well, knows sit and learning to use the crate. We let him sleep with us at night. He tried to choke himself on a bully stick. Won’t be giving him those again!! We have a wonderful Goldendoodle who is tolerating him very well. The GD immediately taught him how to play rope tug. Chunk, the EB, is definitely a dominant dog. It was very cute and the GD is very gentle with him. Even from day one he immediately became a little over aggressive to the 2.5 yr old GD. I am new to this type of personality. Sometimes no and pointing a finger at him seems to mean MORE. We have started using timeouts, which are helping. My son had reconstructive cosmetic surgery from a black lab dog bite when he was two. I was not there but the dog had seizures, he bites and my MIL should have never let my son near him. It was not the dogs fault, it was my MIL’s. Ever since that injury we have always owned bloodhounds due to their gentle nature. They were fantastic, our GD is the same. We started experimenting outside of the bloodhound breed once our kids were older and have been pleasantly surprised. I admit might be a little over worried, I have read this is normal EB puppy in several places. I want to get him fixed ASAP but the vet says they usually wait till at least 12 weeks.

We have a deposit on a girl that we are supposed to pick up 6/6. I am second thoughts... I am thinking maybe Chunk goes and we get the girl instead? Girls are typically less prone to aggression in the canine world statistically speaking.

I am wondering if this is normal behavior or if we should be alarmed.
My kids are now 14 and 17. I realize they will be gone soon and I have always wanted more dogs. P
My husband also has a Mini Doxie but he just hides from the bulldog as the bulldog is like a pac man bull dozer. We keep them separated except in our laps and they usually do pretty well together but it must be supervised as Chunk gets rough with his play which is expected.

I admit I work in an RD and strongly believe pit bulls have been bred for aggression in the past and that they are prone to more aggressive attacks although MOST are wondered family pets. I saw another owner who was killed by her two pit bulls after being quarantined for biting a person. She was killed at the quarantine facility. https://blog.dogsbite.org/2019/03/dog-bite-fatality-pit-bulls-kill-owner-bite-quarantine.html I have researched and researched the bulldog breed and I have never seen a full EB kill someone. I have the time and money to devote to a dog but we remIn very active and travel. If this will be too much stress for the dog then maybe he is not for us? Please help!!!

I called several rescues In my research to determine the main causes of owner surrender. Only one admitted aggression is becoming more and more of a problem within the breed. I thought she was biased.
I understand aggression and dominance are two separate things. Sorry if I have offended anyone.
I am trying to attach two videos. One is of him earning to play tug, the next is him kind of bring agreesine with our GD. He gets more dominant than this. Thoughts?
Last edited: May 18, 2019
OP
J

Welcome to EBN.... your video is typical puppy behavior, you need to teach/train them to not be overly rough. Bulldogs do tend to play rough, but that does not mean aggressive. You’ll need to redirect and ensure he gets corrected if he get too intense.

Any dog regardless of breed can be aggressive or ‘dangerous ‘ based on how they are raised/train... so of the worst dogs are small ‘lap’ dogs for bitting, May not kill, but they are more likely to bite due to being treated more like a human than a dog... not given boundaries or rules.

As for owner surrender... you will never really know the top reason people surrender because most will not tell the truth and just give a reason they feel is acceptable for surrender.

Bulldogs are strong, can be lazy or full of energy... they are Velcro dogs, meaning they will be your shadow and rather be with you than another dog. They have breathing issues and can’t be in the heat... anything over 70 for long periods could be dangerous.

Food... avoid grains and chicken. High quality kibbles are bwhat you want to feed unless you are willing to go raw.. then that is the best for them

He sure is a cutie... best of luck

I thought I might be worrying a little too much! Thank you for your quick reply! He is so wonderful 99% of the time! The shark puppy is real but he really gets upset if we ignore him for a minute.

I read one of your posts to another new puppy owner. I found a lot of info on this forum! He responds so well to almost everything we teach him. He learns fast. He is a Velcro dog, as is our GD. We LOVE that in a dog. He seems to already have allergies as had a contact dermatitis already but clears up by rinsing him after being in grass and applying coconut oil! I think we will love him dearly! We have a few weeks and if a female seems to be TOO much to add to the mix we may wait. We want to make sure everyone gets enough attention.

Thank you!!! We are so happy to have the time for an EB and appreciate your experience with the breed.

Jcbjlt said:
I thought I might be worrying a little too much! Thank you for your quick reply! He is so wonderful 99% of the time! The shark puppy is real but he really gets upset if we ignore him for a minute.

I read one of your posts to another new puppy owner. I found a lot of info on this forum! He responds so well to almost everything we teach him. He learns fast. He is a Velcro dog, as is our GD. We LOVE that in a dog. He seems to already have allergies as had a contact dermatitis already but clears up by rinsing him after being in grass and applying coconut oil! I think we will love him dearly! We have a few weeks and if a female seems to be TOO much to add to the mix we may wait. We want to make sure everyone gets enough attention.

Thank you!!! We are so happy to have the time for an EB and appreciate your experience with the breed.
Click to expand...

Christine said it all. Btw I have male n female n my female Nyala can get aggressive with Duke. She punctures some holes in him n scrape/burns just a couple days ago over a new toy. I personally would wait before getting another one since you already have a few at home. Give him a few more months. When you say you travel a lot is it by plane? If you plan one flying your dogs with you, you might not want an EB. Also 12 weeks to get fix is a big NO in my book. Way too young. IMO Getting neutered has nothing to do with aggression, it’s simply training. Dogs needs to be trained n not letting them become the alpha cause they’re small n cute. More n more owners are waiting much longer to get their dogs fix. Puppies needs their hormones to balance the system, fight diseases, bone structure......

EBD pups can get rough! English Bulldogs are known to be stubborn. It looks like the pup is just trying to play, even possibly wanting to try to nurse on your Doodle. That is all normal for a pup. Usually in the morning, and evening, they get the "zoomies" and run and run. You need to have a crate for him, so if he gets to bugging everyone too much-put him in for a nap! Give him plenty of toys to play with,nothing that he can swallow. No rawhide, or anything he can choke on, as you have learned. Do not give up-the most thing you will need is PATIENCE. It will all be worth it(someday) Make him a toybox, so he can fish his toys out. Of course I have only had one dog in my life who put them away! When he bites, tell him "no bite" stick a nylabone in his mouth and say "here, bite this!" Chewy also has Benebones, which my dogs love.(similar to nylabone-but I think tastier) haven't tasted them myself...... [MENTION=19025]Jcbjlt[/MENTION]

Excellent advice from everyone. The only thing I would add is NO rope toys. As they get used a lot, they can shred and the strings swallowed which is very dangerous. No toys with squeakers that can also be swallowed. Solid toys that don't break off are the best, Nylabone, Kong for example. I have a Tuffy toy that has withstood both my dogs but it depends how much of chewer your dog is.

He is lovely, by the way!
You must log in or register to reply here.

Are Two Dogs Better Than One? It All Depends... 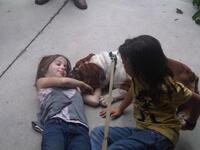 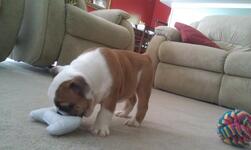 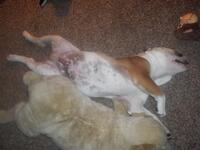 New to this breed