So crazy story..... Took my 4 year old bulldog to vet for his very first hot spot on his cheek. I thought he had gotten bitten by something and we would not eat his dinner. Cheek was a little swollen and he had never had one before, so I had no clue. They would not let us come in per the COVID 19 virus. So they came and took Boyd and did bloodwork since I stated that he would not eat. Most of his bloodwork came out fine, vet said he was young and healthy. But he showed up positive for pancreatitis. They gave him fluids and a Zofran injection. They also sent home a prescription of Metronidazole. They also sent us home with Hills, prescription diet food to start him on today. They told us to not feed him anything last night. I think its worth mentioning that right before I took him to the vet, he pooped (solid) and peed in the yard. This am early, we woke up to Boydy had had diarrhea in our bed. So we got up, cleaned it up, and he took his spot on the couch. He would not eat or drink any water. So around 3ish, we called the vet and told him what was going on. He wanted to hospitalize Boyd. We said, no, as there is no one there overnight and they are closed on sunday. So Boyd would have to stay 2 nights. So my questions is has anyone had experience with pancreatitis? He has had water on his own now but is also still having diarrhea and not wanting to eat. He seems totally fine, except for diarrhea. He did not have any of these symptoms before the vet visit.... Any help is appreciated.
D

That doesn't sound like normal treatment to me, giving metronidazole for pancreatitis. Normally pancreatitis isn't treated by antibiotics unless there's an abscess forming. It's commonly caused by gallstones, so did they do an X Ray or ultrasound to check for that? Also, you need low fat dog food, not their Rx dog food which is probably causing diarrhea. You could try a frozen raw turkey or rabbit with some supplements. I've bought some raw dog food from this supplier, here's a link to their page on pancreatitis. https://bigcountryraw.ca/sp_faq/my-dog-has-pancreatitis-can-i-feed-raw/
OP

No, they did not do an xray or ultrasound. They only did bloodwork. He is drinking some water but no food as of yet. Thank you for the link, we will check it out. Also, it looks like their might be some plant/vegatation in his diarrhea.... no blood.
D

shade said:
No, they did not do an xray or ultrasound. They only did bloodwork. He is drinking some water but no food as of yet. Thank you for the link, we will check it out. Also, it looks like their might be some plant/vegatation in his diarrhea.... no blood.
Click to expand...

Doesn't sound like vet was very thorough and you may want to try another vet. In the meantime, avoid anything fatty, ie. no fish oil, coconut oil, and preferably lower fat proteins like rabbit or turkey.
OP

Ok will do... thank you for the info. Yes, not sure that we trust the vet that he saw last night and not being able to go into the vet with him was worrisome as well. I am thinking that he might be misdiagnosed because he did not have any of the symptoms until after he left the vet. Crazy how quickly things can change.

Agree that the prescription food could be causing the diarrhea as it’s not a good food at all.

I would normally suggest trying a different vet however during these times, you are most likely not going to be allowed in anywhere. I’ve had 2 appointments with my vet whom I love but I do not like doing the curbside thing and not being able to go in with them and talk directly to the vet. Perhaps you can write down a list of questions and concerns and give that to the vet so everything is addressed.

I'm not an expert on this, but I thought that normally pancreatitis is NOT misdiagnosed... they get very ill, vomiting & diarrhea. Normally from people feeding them too much fatty foods from over the holidays or something. I don't understand how they diagnosed him w/that and he didn't have any signs?!!
D

All of the vets around here have a curbside drop-off. Luckily, Buster's Bully vet has tablets that they give you so that you can actually talk to the vet, face to face so to speak. They ask for a list of your concerns that you give to the aide that takes your pet in. All things considered, although it is not ideal, it is a pretty good system.

I do hope Boyd is feeling better now. I agree about the prescription food, it's not good.
You must log in or register to reply here.

Is your bulldog getting really fat during this time ? 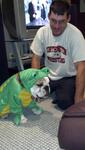 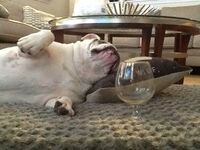