Our boy is here

We’ve had our boy a few days now and he’s our first eb. He’s 9 weeks tomorrow. He settled in right away and has been very happy. Plays with our older dog and get on fine but does try to bully the cats lol.
A few questions though, the breeder had him on royal canine and also mixing in raw green tripe or raw chicken and lamb. I’ve got him off royal canine straight away and been giving him James well beloved lamb and rice puppy.

Each meal I’ve give him 40g of each. Is this enough? Too much or ok?

At night he goes in a cage which is fairly big enough room for a small bed blanket and a training pad. He hasn’t been a problem through the night but does have a poo and wee in there by the time we come down stairs in a morning.

Yesterday though we had to nip out for an hour to get a new washing machine and came back the house stunk lol. He’d pooed in his cage and got it all over him. Stood in it so it was all in between his pads then put his paws all over the cage sides. So that was a big cleanup lol.
Is this normal for a while or anything we should be doing doffeeent so he doesn’t do that?

He also keeps going for feet, hands, ears, noses or anything near him. We keep giving him a firm no biting and putting a toy in his mouth but today this hasn’t worked at all, just comes back for more.
So earlier when he was in full nipping mode I said no biting and put him in his cage. He did some wining and attempted to bark so we just ignored it hoping he would get the message but within 5 minutes we got that smell again and went into him and found the same mess again.
Any advice on this would be great. Thanks 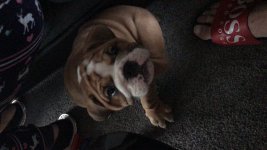 Welcome! He is one adorable boy!

Stay consistent with the firm no and redirecting for the nipping/biting, he will catch on.

Potty... keep in mind, at 9 weeks, about 3 hours is his limit for holding it so there needs to be a night time potty break. Also, remember they need to go out 20 to 30 mins after eating and immediately after waking and playing.

[MENTION=18694]Danbillam[/MENTION] James Wellbeloved products says grain free...but the all have white/brown rice n oats..etc...If your puppy starts smelling yeasty, can be caused with the rice n the potatoes in their bag. Its all “meal” protein in them bags. There’s a big difference in fresh meat n “meal”. Read the following link it will explain to you what meal is. There are different “meals” some good some bad...

Oh n btw for the biting, works well n no you’re not going to hurt him, just grab the floppy jowls with each hand and stretch them firmly with a firm NO BITE n slide him to his crate for a little time out. Works!

Maybe the crate is too big? They usually wo t go in their crate. Is it diarrhea? Maybe he really couldn’t hold it. I remember those biting episodes, we use to call her the shark. It does stop but takes a little while. Lol

You will get lots of great advice here. Welcome and more pictures please. He is ado!
OP
D

Hceril said:
Maybe the crate is too big? They usually wo t go in their crate. Is it diarrhea? Maybe he really couldn’t hold it. I remember those biting episodes, we use to call her the shark. It does stop but takes a little while. Lol

You will get lots of great advice here. Welcome and more pictures please. He is ado!
Click to expand...

I never thought about the size its big enough for his small bed and also a training pad next to it. Last night he had a small poo on his mate it was just when we went out and he was in there for a time out he got in a mess.
He hasn’t had Diarrhea at all and not showing any signs of the food disagreeing with him.
Do you have any idea if the amounts I’m feeding him are ok? Thanks

I would go with the recommendation on the bag for the amount you feed your little guy. I know that I was over feeding mine at first and that caused her to get diarrhea.
I do know that you don’t want a crate that is too big otherwise they may go to the bathroom in it. As they don’t like to eliminate where they sleep normally. He may be too young for that but....I believe they sell crates that have dividers in them for when they are bigger. Or I have also heard of putting a box in one side of it is way to big. Not sure how that would work with a pup that chews.
I am sure others will have more/better advice! Lol
OP
D

We fed his last meal at 6 last night then a snack of a few green beans around half 8 and he’s was a lot better than feeding him later on.
I might make a divider and see how that goes.
The food says 270g per day but I’ve been giving him 120g from the kibble and 120g tripe or raw meat.

Once all the kibble is gone I’m going to swap to raw completely just wish we hadn’t bought 11.5kg of kibble now lol.
OP
D

Danbillam said:
He hasn’t got Diarrhea put his poos are very soft does this mean should feed him a bit less
Click to expand...

Yes it could. If given too much his digestive tract is overworked and cannot properly process the food. So "end" result is poo partially processed...soft serve!
Concerning crate mess. I recommend and crate large enough for him to sleep comfortably without any pee or poop pads. The pads only encourage him to go in the crate. With a pad available, pups will go on them and then roll it up and push to the side...assuming that it's OK to go in the crate. If you are taking him out diligently, accidents should be rare occurrences. Use a bare crate or if you like you can get a Kuranda bed that fits your crate.
M

Weighed him today and he’s 6.5kg and was 6kg last Wednesday.
From the other day I stopped feeding him the raw meat and kibble and yesterday in the morning he had just kibble with a small spoon of pumpkin. Then 2 meals of complete raw with fruit and veg in. Single protein no grains. And a table spoon of plain yoghurt as a snack a few hours before bed.
His poo straight away is firmer, not as much either. He had a slight itch on his ear which has stopped and also the pinkness around his mouth is pretty much gone aswell.
He never made a sound last night 8 hours and no poo just a wee on his pad and he was fast on when we came down this morning.
OP
D

Danbillam said:
Think we’re definitely on the right track with his food now smaller harder poos and the pink round his mouth has gone completely it has never been so white even from first seeing him at 6 weeks
Click to expand...

We got up this morning and our boy was struggling to breath and making like a heaving noise and like he was trying to clear his throat. It stopped 10 minutes or after his breakfast then started around lunch time with his nose running aswell.
We took him to the vets and they said he has a cold. Gave us some antibiotics for him and a injection of it to get it started.
He’s happy in his self and eating drinking and playing.
Hate hearing him breathing and making noises like this

[MENTION=18694]Danbillam[/MENTION] Sorry to hear this about the little fella'. It is very scary when they get sick, especially pups. You can use a steam vaporizer, for him. If he sleeps in a crate, or confined in pen for the night, have it on. Keep a close eye on him, as if he gets any worse,pneumonia could be setting in. Sending prayer for your Frank, and perhaps there will be more suggestions to help. [MENTION=15310]helsonwheels[/MENTION] as to what would be best in the vaporizer.
You must log in or register to reply here.

My Early Gift to You

Please be careful with Tide Pods(and similar) and your dog's access to them... 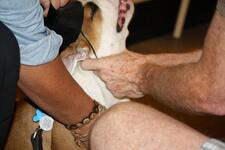 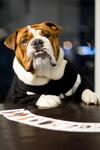 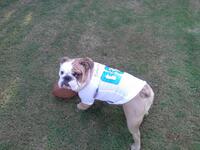 Lambeau has been diagnosed with lymphoma
5 6 7