It's been a long time... Sorry it's long

Country
Good old US of A

hi all. It's been 3+years since I've been here. I joined when I got my first EB Norman ie, Big Norm, NormieNorm. I learned so much here. What food to feed and how to get it delivered, what treats, shampoo, cleaning stuff-all the cleaning stuff! I really got a great intro into being a bullymom. Sadly, Norm crossed the Rainbow Bridge 9/2016.
To say our family was devastated was an epic understatement. I couldn't come here and see everyone's pics. It hurt too much.
For the last year the family started talking about getting a dog again. I kept putting them off. We have a pretty crazy schedule. I just didn't think we'd be so lucky like we were with Norm. Norm didn't care. He seriously slept all day. I said it would have to be the almost perfect dog that would be cool to chill at the house. And we have cats. I really wanted another bulldog. But they aren't cheap and they're never free. So I just kept it on the back burner. I reached out to a local rescue once and had a horrible experience so back on the back burner.
Enter covid-19. Kids and I are chilling at the house. All. The. Days. I decided this would be the time. Contacted a different, much better rescue. Talked about my bulldog experience and how much we miss Norm but we're ready for a new buddy.
So we're at the rescue looking at one dog, kids were excited but I wasn't 100%feeling it. The initial lady I spoke with sends me a text saying they have a bulldog. He's not technically available for adoption because he has to get some medical stuff fixed, mange, cherry eye, neuter, and chip. But she said we could foster to adopt! So we went to see him. He's a bit of a mess. All his hair was pretty much gone. They found him running around loose. No chip, no owner could be found. They've had him about a week. He's on meds, antibiotics, rx shampoo, ear drops. He's so cute. We went back to the rescue. I said, "what do I have to do?" Meanwhile, my youngest is wailing that we're trying to replace Norm and she wants the other dog. I signed up to be his foster to adopt. Once the medical is done- which the rescue covers! He'll be officially ours. They think he's between 1 and 2 years old. He is settling in so nicely. He loves having 2 girls (14 and 11) to play with. I'm hoping housebreaking will catch on quick. I've been watching him like a hawk and getting him used to GO OUT and GO POTTY. He's only had 2 accidents. We put a t- shirt on if we're going outside for longer so he doesn't burn. His hair is coming in more and more every day.
My heart is so happy. Somehow, some way, I was destined to have a bulldog again. 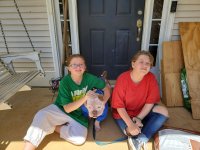 Sorry for your lost. . Now you adopted.. Congrats!! Can’t wait to see more photos of his new journey. What’s his name?

I'm so very sorry about Norman... but I'm so happy to hear that you found another bully to add to your family. He is adorable, what is his name?

Very sorry of your loss of Norm. Though you may think not, there is always room in your heart for another-not replacing, but adding to. Glad that you're back!

Thank you for sharing - what a lovely fur brother your daughters have got. He must be over joyed coming to a family with love to give to a bulldog.

That is one happy looking family and a very grateful looking bulldog. He's loving his new furever home. What did you or what are you going to call him. A good looking bullyboy like that needs a great name.

So sorry for your loss, and bless you for adopting.

My goodness.. I was tearing up.... welcome back!

So sorry for your lose of Norm- we all sadly know the feeling.

What is the new guys name?

How do you know when it's time?

New to this breed