I am a bit frightened right now as I just got back from the vet after being told that Lola might be epileptic. On April 1st she started freaking out in the evening, like there were flies buzzing around her head and she was snapping at them, like trying to catch them. She seemed really frightened and would run and hide. Then it would start again. I video taped some of it luckily. The next morning she did it again and I called in sick and took her to the emergency vet at 6am. They checked everything on her (eyes, ears, heart, etc) and after looking at the film, told me that she was having "fly biting" and "stargazing" episodes which are common in dogs having a petit seizure. They referred me to a neurologist.
She had another of these episodes 5 days later. I filmed that one as well.
Today I took Lola to Davis University Veterinary Hospital and saw the neurologist. They told me, based on the videos, that it looked like a "classic fly biting" seizure and took blood. She is also getting a bile acid test to rule out liver shunts.
She is going back to Davis for an EEG on Thursday. They will sedate her and glue electrodes to her head and monitor her brain for 2 hours. They said even if the scan comes out normal, it still does not rule epilepsy out as it just mean she was not experiencing abnormal brain activity at the time of the seizure. We would know for sure with an MRI but that costs $3000.
I'm terrified that she could be epileptic. She is only 10 months old and the vet said that in a dog this young, there are few other things it could be. Anyone have any experience with this?

Did the vet say that it's treatable? Poor Lola. She looks a little alert.


Sent from my iPhone using Tapatalk 2

Oh poor Lola and you, I was going to suggest Cheryl too, please keep us updated
OP

Did the vet say that it's treatable? Poor Lola. She looks a little alert.


Sent from my iPhone using Tapatalk 2
Click to expand...

Yes, there is medication. I'm just scared that they will occur frequently or turn into grand map seizures. She is actually having one in that video. Thats what it actually looks like. She got so terrified both times it happened.

I'm so sorry about Lola… Cheryl is the expert on this. Thanks for sharing your video, it surprises me how intently she was looking for that "fly" and it's almost like she couldn't get distracted from it. I hope that you find some answers soon… keep us posted!!!

Country
from the Philippines but residing in Germany

I have nothing just

I'm so sorry this is happening. We had a Frenchy that was diagnosed with epilepsy at a little over 1 year old and he was prescribed phenobarbital which he took for the rest of his life and was totally normal and happy. I pray and hope that you get answers to this.

i really hope she is okay. please keep us posted. and im glad that IF (hopefully not!!!!!!) she does that there is medication to help her. but i will pray that she is okay or it is treatable and quick!

Hi there! Vegas was 10 months old when he was diagnosed with idiopathic epilepsy. He is now 6 1/2. He's on a few medications.....3 actually. It's a scary thing to have happen. You can try and distract her......we often give Vegas a ball with treats in it (he actually has one right now) and he will focus on that and push that around looking for treats to fall out. The thing with epilepsy is.....you can't stop it. The brain is rapid firing and there is nothing you can do to stop it.

I wish I had more uplifting news for a baby so young. If it is idiopathic epilepsy and all you ever have to deal with is fly biting....consider yourself blessed. If Lola's condition worsens and she starts having petit mal or grand mal seizures...although scary, it will be okay. Know this.....they aren't in pain when it's happening. I've been told by every single dr that we've seen that he is not aware of what is going on.

Here is our story. There are videos included. I hope this helps in some way. I'm always here if you need me...sometimes it takes me a bit to get online. http://specialneedsbulldogs.com/content.php/16-Bulldog-spotlight-TheVegasShow

Your babies are both beautiful<3 I'm sorry Lola goes through this I don't know anything about epilepsy but my Boeboe started to do fly snapping when she was about 2 years old, I first thought it was her blood sugar and we gave her some bread or treats to distract her and then she usually stopped. She kept doing it almost every night but in our case it was her eye lashes scratching her eye that caused her to have those episodes. She stopped doing it after her Entropion surgery.

I hope the tests you're having done will give you an answer, as hard as it is to see them acting abnormal, it at least helps to know what's going on. Hugs to you

Thanks for the great advise. Lola had her EEG today. It lasted several hours where she was sedated and her brain activity was recorded. The neurologist told me that they did find abnormal activity but that the whole reading needs to be interpreted by two specialists before making the diagnosis. I will know for sure on Wednesday. She had another episode last night. This is what is called "stargazing" seizure:

Thanks for updating and hopefully you can get an answer on what's going on next week. Hugs

My dog is 2 now and started doing the exact same thing since he was 8 months old. I've taken him to every neurologist in PA..I could not fathom the fact that my baby bulldog was epileptic. Opinion after opinion kept coming back the same. He's currently on pheno and potassium bromide. It's trial and error for awhile trying to achieve the exact level for your own dog. We have tried introducing a 3 rd medicine (keppra) into the conjunction, but that made his fly bitting worse. I was told that his fly bitting will probably never be able to be controlled 100%. I'm fine with that because it could be worse. My heart breaks for bully moms that have pups with gran mals. A little over 3 months ago my mom suggested taking Douglas, my bully, to a holistic doctor. At the visit she did a round of acupuncture and included a few meds, Chinese medicine, into his daily pill cocktails. She also told me to incorporate a few things into his food, such as cooked kale, blueberries, chicken, ect. I kid you not he has not had one episode since. He goes once a month to get his acupuncture and b12 shot. Douglas also goes to university of Pennsylvania veterinary hospital where he sees his neurologist. We are hoping that down the road, he can be weaned off of the anticonvulsant medicines. It's worth a try.

I just came across your post and this is exactly what my Lola has recently started doing. Can you please tell me what they vet ended up doing for her? I am very scared.
You must log in or register to reply here.

Geno is limping after rabies shot 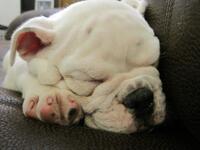 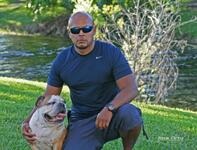