I wanted to share Bender's story and current status with hopes that it helps another furbaby out there.

Bender initially presented with lameness in his left forelimb and underwent x-rays to determine the cause. The first round of x-rays showed no sign of cancer but indicated elbow dysplasia and arthritis. He was prescribed Meticam for the inflammation and started on Cartrophen, Glucosamine HCI and fish oils right away. The lameness progressed and another round of x-rays were ordered 3 weeks later. Unfortunately, the radiographs showed signs of bone loss around the elbow. Bender was prescribed antibiotics for possible septic arthritis, blood test to rule out fungal infection and scheduled for a soft tissue biopsy.

Within 2 weeks the biopsy and new x-rays were taken. Both indicated cancer and advanced histopathic stains were ordered. 7 days later the stains came back positive for histiocytic sarcoma (changed to Myxosarcoma post amputation). He started Gabapentin (300 mg x 2 per day), Amantadine (100mg x 1 per day) , and Tramadol right away. I also layered in Curcumin for potential protective effects and to counter the skin dryness caused by Meticam.

Our vet scheduled an amputation at the University of Guelph Veterinarian Hospital (only one in Canada) right away. Within the two week waiting period, Bender's lameness progressed and the limb began to atrophy. He also started to exhibit severe pain in the form of screaming and inability to get comfortable. The day before the amputation Bender was flat out screaming in pain and required heavy sedation.

The amputation included his front left forelimb and shoulder. The surgery was uneventful and he returned home 5 days later. The first few nights were amazing, we were dealing with a new dog that was free of pain. This quickly turned into a nightmare as he regressed into severe pain uncontrolled by any oral medications. We admitted him to the teaching hospital for better pain control and further testing.

Everything checked out clean and they were unable to nail down a cause for the pain. The surgeon was leaning toward wind up pain resulting from fast disease progression and location around the elbow (involving nerves and bone) pre-amputation. This resulted in extreme nerve sensitivity and pain.

In a last ditch effort to control the pain, Bender underwent a 72 hour constant rate infusion of Ketamine & Opioids. The 72 hour CRI was successful and Bender appeared comfortable and no longer screaming in pain. He was kept at the hospital for another week to monitor pain and perform acupuncture/other rehabilitation exercises. He came home with pregabalin (instead of gabapentin) and amitriptyline.

He was slowly weaned off the amitriptyline and lowered the dose of pregabalin.

Overall, Bender has done remarkable at home. He has adjusted well to life on three legs (as much as he can) and still loves a good tug of war or car ride.

It has been over two months since the amputation and we are going back for follow up x-rays and ultrasound next week.

I have attached some pictures of him pre and post operation. Don't let the vet tell you that bulldogs don't do well on three legs (especially without a front leg). 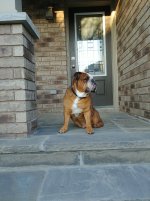 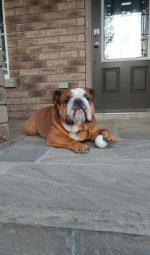 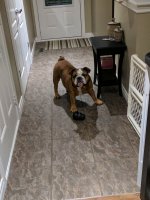 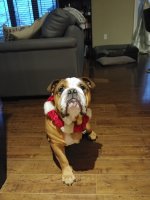 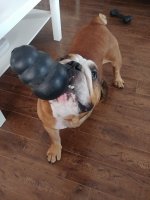 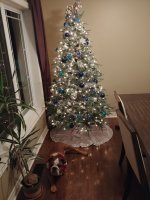 sorry to see this. Poor guy. I hope he continues to live comfortably without pain.

Woah, poor guy has been through the wringer. He's toughie. I hope he is cancer free and can live out a normal(as possible) life, pain free.
Be well, Bender...you handsome fella.
OP

He does have a cancerous spot on his liver but we are hoping that it is slow moving. We are reluctant to do any more surgeries at this point. Poor guy has been under the knife more times than I can count.

In his 6 years of life, Bender went through entropion surgery 4 times, surgery to remove cystine stones from his bladder and urethra and now the amputation.

He keeps fighting though and loves life. I hope he hangs in a little while longer. I can't imagine losing him.

If it really doesn't bother him and he's living normal n happy, that's what counts. He wouldn't be the only dog on the planet that hops along on 3 legs. Seen others running n fetching balls etc. Enjoy your baby and give lots of hugs!

Poor baby but he looks like he is happy and handling it all, must of been a very draining time for you all.

Pray the spot in his liver does not start to give him more pain.

thank you for sharing this!! incredible experience you've had and an experience well shared!!! Hope your guy will be well now for a good while and give you all some time to recoup emotionally in the least!! Bless your hearts for doing all to help him. Oh,,,, and welcome

Poor fella. Glad to hear he is on the mend.

Sent from my SM-G935T using Tapatalk

Wow... what a journey--- he is one very handsome and strong boy! Thank you for sharing his story snd and being such a great bulldog parent.

Bender's story brought tears to me. He is such a brave hero, and you are wonderful parents to him. I know you enjoy every minute you have with him, and will have a wonderful Christmas! Wishing that brave boy the best days to come, and

Prayers for Bender and that he continues to do well. Such a good, brave boy. Also, what great parents you are!
You must log in or register to reply here.

Hi Everyone from Chubadoodle and her Mommy Tracey

Thought I would share our 2018 Holiday Photo that we took of our babies...Rickee, Eleanor & Bennee 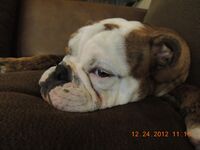 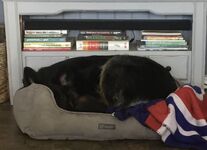 Help Needed! Sudden limping? No signs of cause!

B
Fever of unknown origin

Possible torn tendon in back leg
2