Hey guys! So as you all know, I have had Brisket for a little while, and he shares our home with a bunny (that is not in danger with Brisket around) and Oreo, our 5 year old schnauzer. Now, when we first brought Brisket home, Oreo was excited and very sweet and caring, playful with him, and gentle. Brisket loved playing with him! 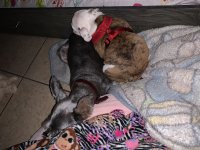 But, now that Brisket is getting bigger, he is getting rougher and stronger when playing with Oreo, and he’s bit Oreo pretty hard. Oreo became defensive when Brisket wants to play and altogether tries to avoid him. 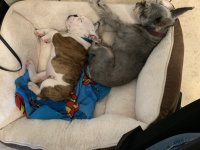 Brisket also will not let Oreo get any attention from me or get near me at all. He tries to bite Oreo or bark at him until he moves. I correct him repeatedly and put him in his crate for a timeout, but he doesn’t seem to be getting better. They used to get along so well and Oreo still tries to approach him gently, but once he picks up on Brisket wanting to play, his guard goes up.

Does anyone have any suggestions? How can I get Brisket to be more gentle with Oreo?

Unfortunately this is a faze that some bully owners go thru... especially when other dogs are involved. Willow was the worst, and even to this day I have to reign her in... she believes that ALL attention is hers. I just reinforce the rules, and if it gets out of hand I put her in the crate. I will also take away playtime, favorite toys... she has had days where she spends the day in the crate. At night I would put her to bed early to give Walter a break... it's important that Oreo gets a break from the "terror". HOPEFULLY he will get the hint that if he makes poor choices he won't be allowed to have his freedom.
OP

Thanks! Hopefully he’ll get the hint. I have had to correct him less today. Oreo hasn’t been hurt by him today so hoping it’ll start getting better

When mine got into that phase, I have elk antler halves, and said" no bite", stuck it in their mouth, and said "here, bite this!" I had one for each. All the other toys, they would always want someone else's but these, they are so occupied they don't move. After awhile I put them up, and save them for "special" or when "someone is in the crate-it helps with the pups "bite craving" I had the whole antler, but they really didn't care for them. Of course you have to keep an eye on any chew-but these are pretty tough.

Agree with the ladies... it is typical behavior, you need to redirect when it goes too much for Oreo. Attention... yeah, bulldog = all about them
You must log in or register to reply here. 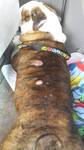 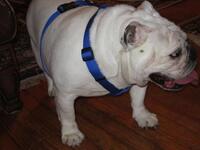 Jul 5, 2021
Hanks Mom
H
D
How do you keep a young EB entertained when you’re working?