I’ll try to make this short.... We sold our house in December and had a contract on a new house that was supposed to close within a couple of days of us selling our old house. We were also going out of town two days after we had sold our house. My parents agreed to doggy sit our sweet Beasley. My parents have 2 other dogs. And after about 4 days of us being out of town, I got a call that Beasley was being picked on by the other dogs, and he was messing all over the house and they wanted to take him to the doggy hotel. I set him up at our vets office and my Dad took him and dropped him off, and did not bring his Fromms food he has been eating since we got him. He’s 11 months old today! Fast forward, we get back from our trip, and find out we are not closing on our new house due to delays, so we were in a hotel and Beasley would have to stay at the doggy hotel. Closing continued to get pushed and we ended up living in a hotel for a month. 5 kids, and us, in a hotel over the holidays, without our baby boy. We went and saw him regularly, but it was really tough. We missed his first Christmas.

We FINALLY closed on our house and went and picked him up that day. We are doing a major remodel on our new house, and I’m getting worried about Beasley. When I feed him (1 cup, 3 times a day, Fromms puppy dry food) he inhales it and then coughs and throws up. I thought he maybe wasn’t getting enough so I added a bit more and it made it worse. I am now giving him small amounts over a 10 min. Period so he doesn’t eat it so fast. He looks skinny to me, and he seems small for almost a year old. There are contractors in our house every day, and he gets moved around for his safety. Last night when I fed him, he started to choke, and fell over, like he couldn’t breathe. I was able to help him get the food out and he’s ok now.

So, is the stress of the new house, the construction, be the chaos of this process causing him issues? Is it because he didn’t have his food at the doggy hotel and now he’s readjusting to his old food? It’s been 3 weeks. Do I need to switch his food, maybe a wet food? How do I get his weight up if he’s vomiting up when he eats? He’s our only pet, so he doesn’t compete for food.

Any advice would be greatly appreciated.

Awe... poor Beasley (and your whole family!) I would hate to be away from mine for that long.
I am no expert so I will let them chime in.
But Bella used to inhale her food when she was a puppy. They sell special bowl for that, but I just put a couple of golf balls in her bowl so she had to move them around to eat her kibble when she was small. When she got a b little bigger then I changed to a tennis ball in her bowl. Now she doesn’t eat fast at all (actually takes her time and goes back and forth to her bowl)

Oh, you and your family have gone through a tough period!

Do you soak the kibble? If not, you could perhaps try that. We used to boil water and pour over the kibble and then let it stand until cold . Now we just pour a cold water on top of the kibble, enough to cover the bottom of Castor's dish.

There is no reason to change food as you’re going to stress him more. Poor little thing is over stressed. If he can’t keep food in n never had issues before all this dilemma started, it’s stressed. Try to find him a spot he won’t be moved too much. Like mentioned go get a slow bowl feeder. The more the bowl looks like a maze the better. Bowls with balls in it, Duke would knock them out. For now split the meal 4x a day till he keeps it in. Don’t give him any water right away. Wait 30mins. Make sure he’s with a family member 24/7 till all this chaos stops. A good daily walk will help him a lot. 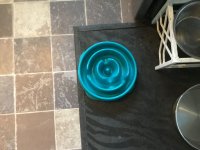 Thank you for all of the great advice!! I will definitely try these ideas and keep him with me. We are a couple of weeks away from having a finished house, so I will be working to keep his stress level down. Poor baby has been through a lot, but we are in the home stretch now! Thank you so much!

BeasleysMom said:
Thank you for all of the great advice!! I will definitely try these ideas and keep him with me. We are a couple of weeks away from having a finished house, so I will be working to keep his stress level down. Poor baby has been through a lot, but we are in the home stretch now! Thank you so much!
Click to expand...

It’s the whole family that’s stressed n the little guys sense it n reacts his way. Like you said just 2 more weeks to go. If all on schedule . ok ok I’m laughing cause it’s not me hehe. Just breathe and put him in your room if he’s not already there at bedtime. He’ll be fine n so will everyone. Enjoy!!

For the time being you could put the kibble into a large pyrex baking dish...the bigger the better. Divide his meals into 3 equal amounts and give them to him in the baking dish 1 after the other . This will force him to chase a small amount of the food around and not be able to gulp it.
BTW, it is time to start transitioning away from the puppy food but hold off on that until things settle.

I would add some warm water to his kibble (tablespoon amounts) and let it sit for a few minutes, that will hopefully keep him from gobbling his food down so fast. IF this becomes a consistent issue, you may want to talk to your vet regarding an elongated palette. Personally I think it's just his age, and both of my bullies gobbled their meals down, so I added water for months.

BeasleysMom said:
Thank you for all of the great advice!! I will definitely try these ideas and keep him with me. We are a couple of weeks away from having a finished house, so I will be working to keep his stress level down. Poor baby has been through a lot, but we are in the home stretch now! Thank you so much!
Click to expand...

Look what I got! 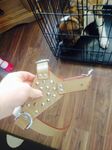 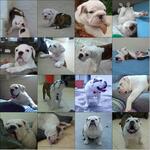 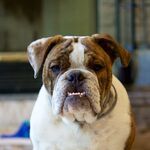