I know I haven't posted here in a long, long time. I decided to go ahead and post today to let y'all know that my best buddy Gizmo (bichon frise) passed away on the very last day of January. He was 13 years old. Everything was fine, he was his normal spunky self, nothing to indicate he was hurting or anything. He was sleeping a lot more but I simply chalked it down to his age. Then on the 29th he didn't eat. That was the exact same day that my eldest son flew the coop and we didn't have much of an appetite either trying to cope with having my baby become an adult so we didn't think much of it. He didn't eat on the 30th either and this was when I noticed some funky smell in his breath so I took him to the vet. The vet checked him out and he said it's time. I was in shock. He passed away the next day.

Angus (my english bulldog) has become so attached to Gizmo over the years - well, actually, it's the other way around, or maybe it's both ways... anyway, Angus' attitude changed drastically. He's become like his older sister, Bullie (my other english bulldog), just want to lie down and do nothing much. It took him weeks to get back to his active self.

Angus, at 8 years old, has slowed down a lot. He still chases frisbees but he's wiped out after a few throws. He's still as beautiful as ever and as attention-hog as ever. Bullie at 12 years old is who I'm worried about. She spends most of the day sleeping. She gets up to move to a sunny spot and then sleeps. But she's still trying her best to boss Angus around and could still manage a little run when I open the door to push her bum on my leg for a scratch. But her idea of a walk now is to go out the back gate and walk to the front door, plop down, and wait for us and Angus to come home.

I didn't post a picture of the bulldogs because I want to post the most recent one in the sun and it's nighttime here right now. I'll try to stay a bit more active on here again. I loved this community.

Sorry to hear about Gizmo. Never easy to lose our little fur balls. You made me laugh about Bullie walking to the back gate to the front door n plops there. I just pictured it lol...

So sorry to hear about Gizmo - what a lovely photo of him. Castor says hi to Bullie and Angus.

I'm so very sorry to hear about Gizmo... it's so hard to let them go, and then your son leaving the nest. I'm glad to see you back, we are here for you my friend

Good to see you, but very sorry on what brought you back.

Gizmo is at the Rainbow Bridge,with our other little friends, going to greet you again someday! Welcome back to EBN!
You must log in or register to reply here.

In case you missed this pic... 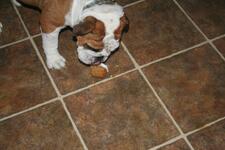