Bad breeding/bad genetics does it always equal a dog with issues?

So, Cooper (male, neutered) is coming up to a year old soon. The breeder gave a whelp date that is different than her website. Our understanding now, is that he was removed from his mother and litter mates and crated alone (on top of other crates) at around 5-6 weeks. We brought him home at 8 weeks (which he would’ve been only 6 weeks old at the time). Since then, the poor breeding began to rear its ugly head almost immediately. Within 2 days of coming home, his many vet visits began. Starting with diarrhea and then skin issues, ear infections, and then eye infections that ranged from antibiotic treatment to debridement of one of his lenses to Entropion surgery in both eyes and correction of stenoic nares. All of these conditions presented under 10 months of age. As of now, those conditions have improved. But since day 1, he was always “sharky”..meaning he mouthed us nonstop. We were thinking typicaL puppy behavior. We always gave a firm, loud “NO” and redirected. If things became to intense (mainly meaning that I was going to end up the most aggravated) I would create him for a short timeout. Well, now he is bigger and that biting inhibition that was never taught amongst the litter mates/mother has still not gone away and is becoming worse. He constantly bites or mouths on us until we’re exhausted and we have to crate him. We usually give him a firm NO! or if we see his intentions starting we redirect with a command followed with praise. It will still escalate after that and that’s when we react firmly by putting him on his side with a finger in his cheek and again saying NO. We are not making progress and our entire family chooses to avoid any interaction. He is not being aggressive and biting of meanness but more along the lines of maybe he doesn’t know how to interact and was never taught the bite inhibition naturally. Or maybe he’s just being bossy or exerting dominance? He doesn’t bite to hurt, or injure, it’s more of a bossy, annoying action. But we feel a dog should not mouth anyone at all, especially now that he’s old enough to know better. Also, it’s Covid times so we can’t really bring in a professional. We are desperate for tips,ideas, knowledge.....anything. We had planned on adding a puppy this summer but not sure if we can instill positive behavior in Cooper first. He loves other people, visitors, and other dogs. We just need a little bit of help here please...Also, he will chew and bite through sheet rock, door, window and floor trims. Leather couches, chairs....anything. Help!!”
🤞🏻

First of all, I'm SO sorry about what is going on w/Cooper... and you are spot on about his breeding. We had an Australian heeler whose mom died during delivery of the pups, so she was "hand raised"... meaning she didn't learn about good manners. We had a heck of a time trying to get her to STOP biting us, it was awful. Of course not her fault...

You will have to start from basics, and we always like to recommend the book Nothing in Life is Free. Basically whenever Cooper demonstrates bad behavior to you or the family, he will be put in time-out (crate)or ignored... this will encourage him to make better choices so he can hang out w/his pack. This takes time and everyone in the family MUST be on board for this to work... I promise you that Cooper only wants to please his family, so he will hopefully get the message sooner than later. Bulldogs are extremely stubborn, so sometimes I have gone back to this training w/my older bulldogs just as a refresher.

Good luck and we are here to help you get thru this hard phase of puppydom... Lol
S

hi akbully, I may not be the smartest or most knowledgeable person as I have 1 English bulldog and he just turned 3 so I to am learning everyday...

We did not get him from a known breeder- and had many issues when we got him, he had kennel cough, ear infection, worms. and it was rough and we thought, what did we get ourselves into, mostly because he had gone from a senior German Shepard to now a EB puppy with problems. But since then we haven't had almost any issues so far.

But I know EBs are known for the chewing and biting especially when young.. Ours never chewed on furniture (thankfully) but hes always been mouthy .. We got him at 10 weeks and since then and especially during teething, we got Kongs filled them with PB and froze them.. I believe that is the only thing that helped us survive the puppy chewing stage and since then that is the only thing he has not been able to destroy.. by freezing the kong it 1 was cold which was nice during the summer and 2 nice treat and kept him busy for quite a long time. Now that he is a little older more so when he get his zoomies he will get mouthy and chew on us and sometimes bite hard, we have used the word EASY, and that lets him know hes hurting us and he chews softer. They also usually only REALLY listen to 1 alfa (which is my fiance) and I can yell or try to correct , sometimes it works other than that I have to have my fiance correct him and he will listen, but he's also a mommas boy so hes by my side all day, its just a funny breed and you just need to learn and try to understand why they are doing what they are doing.. alot of the time its just simply that they want attention, at least my dog! They are a very stubborn breed and the more you are around him you will learn how he works.. I am the care taker or him so I pay attention the most to little things he does, like I noticed when hes in his crate most the day - he acts up more when he is out of it. compared to if hes out of his crate for most of the day he just hangs out and sleeps. or when he gets a certain look on his face he is looking for a phone or remote to steal and run away with so someone will give him attention.
We had gotten a senior (5 year old) bullmastiff a year and half ago and that helped alot. He has someone to play with and teach him things. We got an older dog instead of another puppy simply because it would have been to much to handle at time.

[MENTION=19186]AKbully[/MENTION]. Great advise above.Cooper is entering the teenage phase. His mom wasn’t there long enough to teach him right from wrong. So you got the little extra to work on. Basically that can be any breed. Just EB has a harder head. I wouldn’t put my finger in his cheek but grab the jowls, stretch it’s like you’re doing a firm NO. Then time out somewhere for a good 15 mins. But you absolutely need to ignore him with no eye contact. A lot of members do use the book like mentioned Nothing in Life is Free. You will have to make sure the whole household follows the rules. It shouldn’t take that much time as he’s one n very friendly. You just need patience n determination.

Agree.. with all this advice, he is becoming a teenager and needs reinforcement. nothing in life is free will totally help, but as stated, all in house MUST be on same age and use same commands, consistency is key

Our boy loves to be mouthy when playing, but he never place teeth on us, all jowls and slobber.
OP
A

Excellent book! I downloaded it as soon as I started getting all the recommendations. His behavior has actually mellowed out! We went ahead a put down a deposit on a girl puppy from a very reputable and well researched breeder. I’m feeling confident that we will have Cooper knowing his place and being well mannered. Thank you all! Now I’ll go through all the threads about introducing a new pup into our home. She’s due on the 16th of this month.
C

So sorry you’re having these troubles. I do believe breeding is a huge thing. Our first bully was from a puppy mill and had so many issues behaviourally and health wise. Our current girl is from a reputable breeder and there has been nothing at all. She was perfectly behaved from the get go with less puppy behaviours even than you would normally see in any dog.
Only thing is that she will lay on her back and basically pretend she’s dead to avoid a walk. LOL.

What we found super helpful was to bring our bully to a really good boarding kennel for daycare a couple times a week. That socialized our girl however also included some minor training. Where we are, boarding kennels are still open for this.

I think with covid you are at an advantage because if you are home perhaps you can work intensively on the behaviours. Have lots of kibble and good/treats ready and only give food as reward for positive behaviours. We initially did not bowl feed. Any food our pup got was reward for good behaviour. It paced and slowed her eating and reinforced all training.

Sorry I’m not more help.
You must log in or register to reply here.

Our younger bulldog bullies our older one 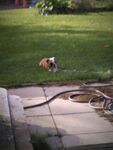 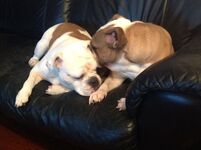 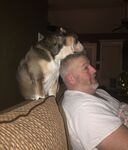 J
Help Needed! New to the breed. Should I be concerned?