The owners of cherry eye dogs, is your dog very active or not? Was she/he young or old when they had cherry eye?

I noticed when Nyala plays rough as playing tug a war or when her cousins pitbulls come over and she just doesn't take a break from running or growling....well the same bottom eye lid she had tucked seems like it gets puffed. If you're facing her, would be starting from the middle bottom going towards right side. From what if figure it's more like blood pressure building in the eye cause she's over excited because it's only when her cousins come over or playing tug a war.

Before her surgery, Nyala is trained to go do her business at the bottom back of the yard are where she has about 12x12 3ft metal fenced area and in winter when it was crispy she would rub all along the fence going up n down to get a cold "scratch" rub. Then next thing you know her cherry eye would pop out and I push it back in. This is what brings me to think of blood pressure to the face. Maybe it's a known fact and I didn't read or see it yet well duhhhhh me lolll. Oh n no more tug a war for her!

Murray's first cherry eye popped out around 7 months, no issues whatsoever with it post surgery and that was in December *knock on wood* around March (age 1) I noticed his other cherry eye popped out, that one was a bit different in that it went in and out several times over a few months and then in July at one point it came out and wouldn't go back in so he had surgery last month on that eye which was also successful, he now has a corneal ulcer in that eye but that is unrelated to the cherry eye surgery. With both instances I discovered the cherry eye when I came home from work or when he woke up in the morning and not after play. Murray plays with his pit/boxer mix cousin from time to time and I have noticed that sometimes when they're in heavy or extended periods of play his eyes are red but no problems related to the cherry eye and I think the redness is partially due to the fact that he isn't drinking filtered water all the time if he's at someone else's house. So, while I am no expert I would say that the redness is related to the elevated blood pressure but only in my own experience not the cherry eye.

Willow has cherry eye right now, she has had it for awhile and surgery will be soon. I notice her's pops out way MORE when she is active or being crazy... Lol
OP

Hmmmm...interesting. ... im thinking its more on exciting temperament dogs.
You must log in or register to reply here. 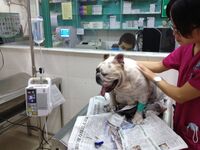 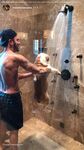 A calamity for our Buster
2