Yesterday we decided on the spur of the moment to take Chance out for a Santa photo. We did one as a family last year for his first Christmas so we figured why not.

There's a local doggy hiking group that raises money for different animal charities in our area and raises pitbull awareness (we did a zombie dog walk with them last Halloween) and when I realized that their organizer was hosting Santa pics at one of the local pet stores, we went down to visit them.

You'd think since Chance has grown up with a camera in his face that he wouldn't look so... (well, however it is he looks... I'll leave that to your interpretation.) I think the noises that the photographer's assistants were making really confused him. He looked perfectly content standing around before and after. LOL The other dogs seemed to like it though! Last pic (not of Chance... *gasp*) is actually my favourite of the day. Those dogs look like a pop group. 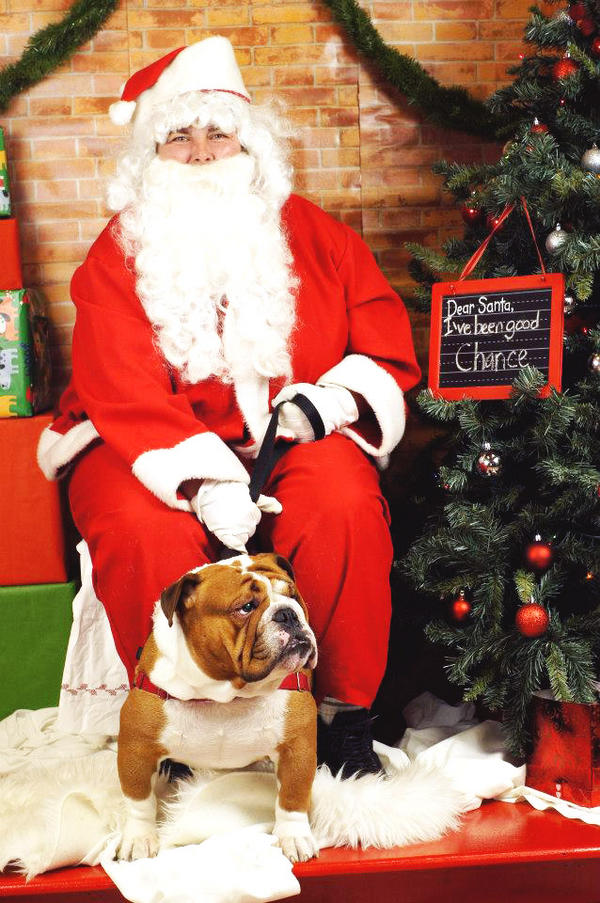 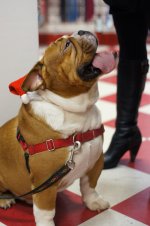 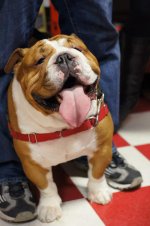 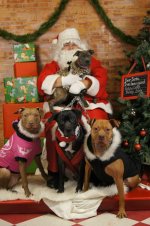 He is so handsome! Wow!

I think they look great, and Chance is looking good.
OP

[MENTION=3735]LaurenA[/MENTION] haha yes, I guess that description is accurate. I think Chance is like me in that he doesn't like hyper sounding voices. LOL

We stopped by the vet yesterday... She seems to think he is too big. He gained almost 8lbs in the last 5 months since he had eye surgery. I think he was a little lighter than normal when he saw her last... but I didn't want to argue with her. She wants him on a diet now. Kinda made me feel like I was doing something wrong.

I think he looks perfect! I see your avatar and its a little puppy and I thought he was still young then when you posted these pics I had to to a double take he is so handsome! I think he looks just fine!
OP

Oh haha... no I just love that pic from when he was a puppy. It was a total fluke that I had a camera phone out when he was chewing on a stick that looked like a cigar. I can't part with that avatar pic. He turned 2 this past Tuesday.

oh my he looks so handsome with santa

The pop group, I like the one on the left, has her paw on Santa's boot.

He is such a handsome guy! I love the pics! :D

I think pits are really gorgeous and loveable dogs. (Well, I think that about most dogs... I mean I go to Woofstock every year.) Ontario's stupid pitbull ban makes things really hard for pit owners.

I love the Santa Pic, Chance looks so darn cute. We went to Woofstock this year for the 1st time. Got a lot of good deals, and saw lots of cute bullies. We plan to go to the summer one this year, maybe we'll meet you there.

What a happy boy! 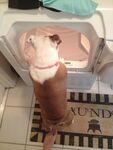 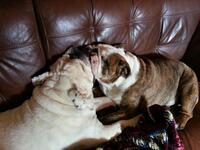 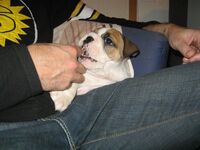 I HAVE BEEN ADOPTED! ~Nate~English Bulldog Available for Adoption in Texas