Tia's back at agility!!

So after Tia unexpectedly went into heat a couple of weeks ago (the SPCA and the vet she saw when she was with them thought they felt a scar from a spay), tonight was Tia's first class back at agility. She had missed 2 classes, but I attended one of them because my friends are in the same class as I am.
Not only did Tia pick up right where she left off, she did AS WELL as the other dogs for the sequences, and BETTER that most at being able to "wait" until I told her to start the sequence (giving me time to get 1/2 down the sequence path so I could direct her), all off leash.

So, breaking this down for anyone who doesn't know what I mean....

I could put Tia in a "sit and wait", walk down past the first jump, past the second jump, call her, give her the commands for the jumps, be AT the 3rd jump by the time she got there, direct her into the semi-circle shaped tunnel, be at the end of the tunnel when she came out, and direct her over 1 last jump. When we had left off before her heat, we were just working on doing 2 or 3 jumps in a row, on a leash, and through a straight tunnel (not in a sequence, just working on the tunnel), and I couldn't have her off leash.

We did another sequence tonight where she needs a bit more work, but she still did awesome. It was through a tunnel that has fabric that falls to the floor at the end, and they have to tunnel through that fabric and out the end. The command for this is "Push", so it was Push, then the suspended tire, then onto a low "table" where they have to lay down for 5 seconds. The problem for Tia was the "lay down". No biggie, we can work on that this week.

I am just so amazed at how well she did. I swear she LOVES the class (I am sure all the cookies don't hurt). One of my daughters will be taking her to Canine 4H (my other daughter will take our border collie cross), where they will do some agility, some obedience and some Rally-o.

Oh, and Tia is booked for a spay on November 12!

Keep up the great work Tia. I know your Mommy and Daddy are very proud of you.

What an awesome picture!!

Fantastic work Tia.... she has found her calling! So great that seh loves the class
You must log in or register to reply here. 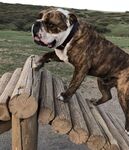 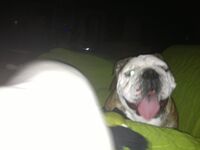