Please someone help me!

My little English bully has been suffering with a respiratory infection for approximately 5 weeks now, the first course of antibiotics had worked wonders, she was still a bit noisy so the vet gave an extra week of antibiotics. After that week she was seen by another vet in the same practice and she took Daisy off the antibiotics and said her stomach needed help, put her on omeprazole and bisolvon, which did nothing for poor Daisy. The week after she went to the vet again and seen the original vet who was not happy that Daisy had been taken off the antibiotics and her chest sounded awful. He gave a two week course of antibiotics, we went back today and he said her chest sounds like a mess, he’s put her on stronger antibiotics for another two weeks. He also said she was struggling to breathe and gave her a steroid, the same type that are used on human patients for covid. She finished the last of her antibiotic tonight ready to start the others tomorrow morning. Tonight though she has tried to cough, started to wee and then went all ridged and fell, her back legs were too stand. I picked her up tipped her head down and gave 5 blows to her back between the shoulder blades and she began to wriggle then. I realised afterwards that she was still urinating while I was smacking her back. She went straight to sleep and sounds like she did before the choking incident.


We have spoken about whether it’s cruel to keep her going and if she will ever recover. The vet seems to think she will get through it so fingers crossed.

First question, how old is she? 2nd, is her vet well trained in treating bulldogs? That is very important. I think a specialist is in order as it also sounds like she had a seizure.

Whereabouts in England are you?

Some other Brits on this site may know of a good bully vet. There is a place near Newmarket that my neighbour in Lincs took his dogs and he swears by them.
https://www.dickwhitereferrals.com/services/

Let us know what happens.

Approximately 5 weeks on antibiotics? Her immune system is down. I agree with [MENTION=13737]1Chumly[/MENTION], you need a specialist that knows EB.
[MENTION=13960]Zedsded[/MENTION] ?

Sending healing prayers…. I agree a specialist should be seen

Whereabouts in the UK are you? There is a good Bulldog vet that a lot of people use which is Liverpool way? Unfortunately the two we had used in the past both retired in the same year!

Sending love and prayers for little daisy. I hope you have been able to find a specialist.
Looking forward to an update that she is moving in the right direction! I'm so sorry you are both going through this.

I'm so sorry about your precious Daisy!!
I hope you're able to find a bulldog specialist who can help!
You said the vet thinks she'll get through it---but were you referring to the respiratory issues
only? Does the vet know about the episode where she went rigid and fell? That must have
been so scary!

You posted this 6 days ago, so I hope she's improved!
Prayers sent up for her and all the hoomans who love her! (( hugs ))
You must log in or register to reply here. 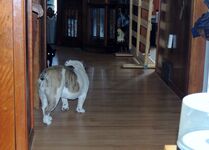 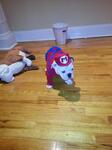 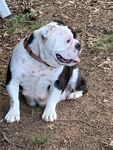 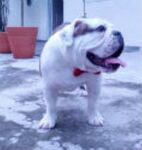 Rough vet visit for our 10-y-o, pneumonia and myocardial tumor