Bear got stung by a wasp

So I just let bear outside along with our other dog Emma, I wasn't paying attention but I looked over and thought he was playing with a piece of grass because that the kind of stuff he does but it kind of registered that it was a little red wasp and before I could even think it moved and flew away and bear was shaking his head with saliva flying out. I bring him inside and threw him on the counter to check his mouth I saw nothing and felt nothing I'm just wondering if anyone else had this happen and if their dog showed symptoms. We called our vet and she said if no symptoms are showing then there's no need to bring him in. I swear this dog is trying to raise my blood pressure

Just keep an eye on him for swelling. A couple years ago Louie had something in his mouth and I stuck my hand in there and pulled out a bee! I face home some Benadryl just in case but he was fine.

Jake got stung last week on his lip. Was at my son n I didn’t have Benadryl on me so we gave him a Claritin as all they had but didn’t want to take any chances. He was drooling a bit but was fine. Will now be caring Benadryl in my purse. Idk what’s with the wasps up here this yr it’s horrible.

Since bullies are so curious(nosey!) it pays to keep benedryl handy! Maude got stung by a spider and had bumps all over her. It took a couple of days of benedryl for the bumps to go away.

@Sidxeyx --Is Bear okay? Ugh, something similar has happened to
Meaty three times in his life so far. Hope it NEVER happens again! **ALWAYS** have Benadryl nearby! It has literally saved Meaty's life as we RUSHED him
to the closest emergency vet, which is 40 minutes away!

The last time,
his face and throat were SO swollen, but unlike the past 2 times, his
breathing was becoming labored. I truly thought we'd lose him before
he got his dexamethasone injection at the emerg. vet. The vet said that
giving him Benadryl bought him a lot of time.

All 3 times, when Meaty's sweet face started swelling, we never knew
WHAT exactly happened--we assume some type of insect, but the
vets have always checked him thoroughly, and no visible bites, so
we'll never know.


One of our past vets is also a bulldog lover/ breeder/ and he and
his wife have shown bulldogs for years, too. They lost one of their
favorite bulldogs years ago when it was bitten by a centipede! I
ddin't know a stupid centipede could kill a bulldog, but it did! I still
can't get over that a vet had that happen, when he and
his wife RUSHED to his office to intervene, but it was too late.

On that note, in case anyone wants to ask their vets----this particular
vet also sells what he calls a "bulldog kit" for these kinds of emergencies. It's a pre-filled syringe of dexamethasone, he also teaches you
how to inject it, etc. Of course the needle is safely still in its shield
so it stays sterile and won't accidentally poke anyone. I don't know how
common it is for vets to sell these, but it gave us soo much peace of mind to have it, ESPECIALLY when we traveled!

P.S.....Forgot to say--- all 3 times Meaty's life was in danger, it was
once when we were traveling, no GPS, had no idea where the nearest
vet was in a strange city. Annnnd, the other two times, it was
very late in the evening. Of course those stupid bugs had to threaten
his life when the closest emergency vet was 30 minutes away!!!
G

Unfortunately we have a miniature Dachshund and Bella our Bully and they both like to catch and eat Bumble bees. It can make for some pretty eventful outdoor times. Keep a large stash of Benadryl on hand at all times. So far neither has had any issues.

@GrgJon ----Wow! It's AMAZING that they haven't had any
problems!!! I never knew ANY animals would EAT bees.
I'm sooo happy that they've never had their faces swollen
and breathing issues like Meaty has.

We'll never know what
ACTUALLY caused these emergencies...it may not have
even been an insect...ugh!

Best to have Benadryl and aspirin on hand. Hope little one is feeling better.
OP

Bear is good!! He hasn't sown any symptoms aside from the first things I had mentioned, he was back to being a little spaz in no time

thank you all for the help I was looking for our bottle of Benadryl but I couldn't find it so I'm glad it was not needed. I'm thinking of making an emergency kit just for the dogs since bear likes to test god yet has no survival instincts (he chases wasps but runs from trash bags) this was him earlier tonight doing his "rotisserie chicken" pose

Never a dull moment
You must log in or register to reply here.

Bulldog twirling on bum and barking 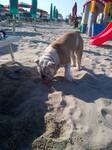 B
vomiting bile for months

I HAVE BEEN ADOPTED! ~Ruby & Tank~Bonded Pair of English Bulldogs Available for Adoption in Illinois

THE TOP 10 ALLERY FIXES FOR DOGS