At a local dog park visited daily, wherein most dogs know & play with each other, O'Malley (O'M) bit and drew blood on an 11 mo American Bulldog twice her size while rough playing. I noticed at a water break, small amounts of blood on her tongue. I visually examined her for wounds, but found nothing and assumed she bit her tongue. Standing a few feet away, I turned to the American Bulldog owner to check if her dog was okay, but she was leaving the park. Given it was early evening, darkness was approaching, I didn't think anything of her leaving.

O'M returned to the park the following day with the neighbor, as I worked late. Upon retrieving O'M, the neighbor informed me that 'other dog owners' NOT the owner of the American Bulldog expressed concern over the biting incident wherein O'M is the aggressor.

Shocked, I feel bad the other dog was injured for which I'll follow-up with the owner to apologize and take care of any vet bills.

O'M is 1.3 yrs old, acquired her at 3 months, she's the smaller EB's weighing 40 lbs. Neutered at 7 mo, historically no behavioral problems with adults, kids or dogs until this incident.

Aside from training re-inforcement and breaking up rough play, should I be concerned?

Tough call... donot know all the details of their play, it is possible the AMBulldog did something that O'M gave warning and the AMB did not heed or maybe O'M was tired and the AMB still wanted to play. For this and many other reasons I stay very far away for public dog parks... too much can happen without you ever knowing the what or why.

It can be an isolated incident, but will be hard to tell since you will be on alert when you visit the park and your nervousness will make her think she needs to protect.

I'm curious why the AB's owner didn't talk to you when it happened? maybe they didn't realize the wound on their dog til they got home? In any case, that's good that you'll s/w the owner as maybe they can shed some light as to the circumstances of the "bite occurrence" as it happened (if they witnessed it). Maybe OM was playing rough and nipped the AB a little too hard; like Christine said, it's hard to say.
You must log in or register to reply here. 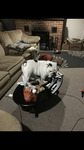 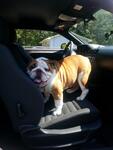 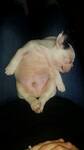