Hi all, my five month old bulldog puppy is amazing - so happy, calm, and sociable. Really the only concern we have right now is that she just doesn't seem to like going on walks. We take her out multiple times a day to go to the bathroom and she just refuses to leave the area right in front of our building. We have taken her on short walks before and it requires pulling / tugging on her harness to get started - she doesn't really start walking normally until she thinks we're headed home, and then she does it perfectly (likely because she knows it's almost over.) She also runs around and plays A LOT at home, so I don't think it's a physical issue. She is very healthy, but I'd love to be able to take her on walks so that she can get some of her energy out.

Has anyone else had this problem with their bulldog? If so, how did you overcome it? We have tried giving her treats throughout the walk but that doesn't seem to help much.

I think it's just a matter of her getting used to being in a harness and leash. Try a toy on the end of a string that she can chase and go after, that might work. Be patient and keep at it. She'll get there eventually.

If you have a friend who has a dog, try going for a walk together. If you don't, try having a "special delicious" treat only for walks, and reward her when she takes a few steps in the right direction. Or, when all else fails, carry her away from the house, and walk her back. Trying to "drag" a bulldog never works!! The more you insist, the more they resist! Bribery usually works! :D Others will have some other ideas!

Somewhere in the Universe. Wish you were here!

Another member once said..."walk a bulldog as far as you can carry him/her." zone.
I know this is not a solution to your issue but your house is a safe place. How is she on car rides and walking around away from home?

As said above we always find there is more interest in walking if another dog is involved, they can be a complete pain though! :D

My Gilbert does not like walks! Prefers to just play in the backyard or the house (depending on weather). As soon as I grab his collar, or his leash, or his harness he runs and hides in his tent. I do offer treats..especially when need to get in the car (which he also does not like) and Gilbert will refuse the treat until whatever we are doing is over. It's like he knows it is a "bribe".
You must log in or register to reply here.

How do you keep a young EB entertained when you’re working? 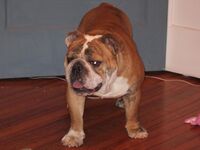 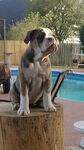 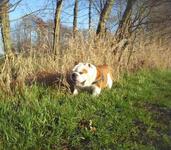 Bulldog refusing to go on walks
2