Sharing....Only becasue one bed was in the washing machine.... 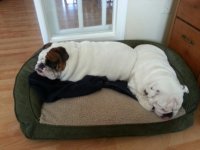 Dubbie does not like sharing with Mr. T but she did make herself a spot as you can see :D. We are still "battling" his staph situation and right now he is at the vet waiting to get his third ear procedure done to try to save his ear canals :crying: All of this is from total neglect. It makes me so angry

and sad. He is half the size he should be and half the weight at 2+ years. It makes him the perfect lap dog...

NO matter what we do he smells so Ms. Diva Dubbie does not like that....Tio just had a bath so she "took her chances here"

They are so cute together. Hope Mr. T's ear gets better.

Bonnaroo bound in my bulldog batmobile

Such a cute picture! Hope all goes well with Mr.T at the vet!!
N

They look like the belong together. Great pic of your bullies.

I love the cuddle time pictures, they look so Adore-A-Bull together!!! Please keep us updated on how things go at the vet for Tio, hope things get better for him soon.

Sweet snuggles! Hugs and prayers that he heals up quickly!

Tip of the Mitt, Michigan

Poor Mr. T, hope he's gets all better soon and his ear canal will be ok. Now about them sharing the same bed. :D Dubbie's sure giving in isn't she sharing her bed and.

Such a cute pic ... one of the rescues who came into us had such bad ears that in the end we were forced to put him in for total ear canal ablation. His ears are now totally sewn up and he is deaf. He is a senior bully, Dexter, and who knows how long he had had the ear infections for it to get to the point where nothing else could be done. His foster pawrents fell so deeply in love with him, that he now has his furever home!!!

And in fact he was at the Classic Dog Show at the IX center in Cleveland in November when ROEB had a booth there. He was the chick magnet in the whole arena!!! I swear we could have had him adopted out to about 15 families in the 4 hours he was there!!!

Who knows how many years Dexter was neglected , I just hope and pray that Mr T has been rescued in time for it to happen to him. If not, then yes the surgery may leave him paritally or fully deaf but it is amazing how they learn and cope. Communicating with a deaf dog is really not as hard as it seems.

I've got the best valentine in the world

Major' first Valentine's with us.... 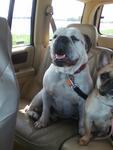 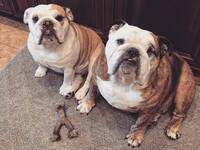 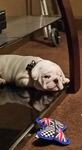 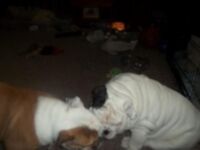 I HAVE BEEN ADOPTED! ~Luke~English Bulldog Available for Adoption in Ohio

AVAILABLE FOR ADOPTION! ~Lugnut~English Bulldog Available for Adoption in Texas