After 8months definitely your dog’s immune system is down. Way too long to be on any meds. Diarrhea is an issue we read often on this site & I would have to say 90% from what we read are dogs on long term of antibiotics. Antibiotics will destroy the gut flora n why your dogs isnt getting any nutrients. When dogs, cats even humans are on antibiotics, we always got to give them a probiotic while on the meds. I always give a probiotic from a food source n never from a pill. I use fermented sauerkraut or fermented veggies. Works great. 1/4 cup mixed in their meals 2x a day. Avoid Greek yogurt or goat’s milk or any fermented milk till Diarrhea stops. Milk doesn’t help diarrhea. Well from my experience. You can also use 100% organic pumpkin puree n not the ones for pies. Check your ingredients on the can as some will add sugars. One ingredient only. Pumpkin…. Keep us posted

GusterandMabel said:
Hi there! Just wondering what the specialist had to say? My Gus has had on and off diarrhea for about 8 months now. I've tried probiotics and chicken & rice and pumpkin, you name it. Vet had him do a round of flagyl along with B12 injections which stopped his house accidents but did not stop the diarrhea. As soon as he was done with the flagyl, the house accidents came back as well as the awful gas. The vet put him back on another 7 days of flagyl and then gave me a six week supply of tylan powder to use after the flagyl is done. She also had me switch him to Hills I/D which he hates and is not stopping his diarrhea. Also, he did have a full fecal panel and blood panel recently. His blood panel was normal except for something the vet said would be off because he's not absorbing nutrients due to the diarrhea. His fecal panel showed some bacteria which is why she did a second round of flagyl. She didn't do an u/s yet as I think she's trying the easiest path first, especially since the first round of flaygl stopped his gas and accidents. He's still playing and behaving normally, but I feel so bad that nothing is stopping his '"trots". Before I go searching for a new vet, can anyone tell me if they've had experience with tylan powder and how it worked?
Click to expand...

2BullyMama said:
Yes, Tylenol powder worked for my girl, she had colitis
Click to expand...

I know you know so this message is for the ones that dont….Tylenol will kill a dog. It’s simply an auto correct typo.

I know you know so this message is for the ones that dont….Tylenol will kill a dog. It’s simply an auto correct typo.
Click to expand...

THANK you… I fixed it
You must log in or register to reply here. 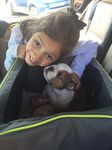 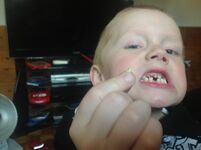