TPLO Surgery vs Other?

Hoping for some opinions / advice from others in regards to going the surgery route or conservative / other way when it comes to a CCL rupture. Unfortunately Zita (picture attached :D) had been having a noticeable limp a couple of weeks ago, especially after going for a long walk. Currently, she has a slight limp / restricted range of motion but it doesn't seem to be as bad as it was earlier. The vet has said "on evaluation she had a right pelvic limb lameness, grade III/V. There was mild right pelvic limb muscle atrophy. On orthopaedic
examination there was right stifle effusion and craniocaudal instability with tibial thrust. There was pain on right stifle hyperextension.
The right patella could be pushed medially but not completely luxated. The left stifle had no palpable effusion and no craniocaudal
instability was elicited. The left patella tracked normally. TPLO surgery has been recommended."

I am in two minds after reading success stories from those who have done the surgery and also those who opted to not go ahead with it. Also there's the negative stories from both ways. Obviously being a British Bulldog, the risk with the surgery is there and also the risk of possible infection after surgery etc. She still seems to be active and it's hard to keep her rested as she constantly wants to go for a walk. We also have another British Bulldog and both are very attached to each other.

Sorry for the rant - in summary, I am mainly just after your thoughts on the outcome from both options from those who have been through them and whether I should get a second opinion from a vet here / see about a leg brace etc? The cost of the surgery is estimated to be between $8000-$10500 NZD however we do have pet insurance for them which covers 80%.

Any thoughts from other bulldog owners?

Sophie tore one of her CCLs and we never had surgery. That was years ago now and we give her all the good things for joints including Glucosamine, Hyaluronic Acid and CBD oil for mobility. She also has luxating patellas. She is still, at 7, moving around just fine. That said, we rarely if ever actually walk her as it causes her quite a bit of discomfort. But I have no regrets that we didn't do surgery. Just my take.

I’ve never dealt with TJ this but have you tried and joint supplements? Turmeric paste works wonders. GLM powder is another good one as is CBD oil.

We have had TPLO surgery on 2 bulldogs and we have no regrets. You need to strictly follow doctors advice for recovery and I also used Neosporin on the surgery site and Tea Tree oil around the site so that it wasn't licked by either dogs in the house (my dogs love Neosporin for some reason). Range of motion exercises were key. We did try alternative treatments for a few months (Turmeric, Glucosamine, Chondroitin and a few other things, we did not have access to CBD oil at the time). In the beginning the leg would seem to get better but then a few weeks later they would start limping again, this went on for about 6 months with each time the knee "going out" getting closer together and lasting longer until it wouldn't get better anymore.

We have a great surgery center in Michigan and I didn't want to worry about everything the pups did since we like to go to the dog park and also do some hiking and I definitely did not want them in pain. The first pup passed away at 13 years old (she had surgery on both knees at ages 7 and 9) and once she healed she was like a puppy. Our pup Nico had his surgery at 3 yrs old (on 1 knee) and is now 8 and has never had another problem. I am still giving Glucosamine and Chondroitin so hopefully he doesn't get arthritis in that knee since this is a side effect of the surgery as they age.

We've tried to learn our lesson and not let our 2 year old jump from the couch when she was younger and never let her jump out of the car or our bed (she has stairs) so hopefully she won't have to go through this.

I hope this helps.
OP
C

Thanks for your replies. We have another appointment on Monday with another vet to get a second opinion and see what they say. It's unfortunate as looking at her currently, you wouldn't know she had the injury which is the part playing on my mind the most.

The arthritis was mentioned as a side effect of the surgery as well as the possibility of the other leg going. Glad to hear your two did well after the surgery @NicosMom . The vet we are going to see on Monday said they do the TTA surgery rather than the TPLO so if surgery is the only way then will have to see which way we go there.

We are going to go the CM route first and hope everything works out ok. Just trying to work out things to ask the vet. There's a lot of conflicting info out there, especially when the dogs also have a luxating patella or slight hip dysplasia and how the surgery can aggravate these.

Will also give the paste etc a go and see. Unfortunately I don't think we get CBD oil here for dogs, and you need a prescription from your Dr to get it yourself for pain relief.

ChrisNZ said:
We are going to go the CM route first and hope everything works out ok. Just trying to work out things to ask the vet. There's a lot of conflicting info out there, especially when the dogs also have a luxating patella or slight hip dysplasia and how the surgery can aggravate these.

Will also give the paste etc a go and see. Unfortunately I don't think we get CBD oil here for dogs, and you need a prescription from your Dr to get it yourself for pain relief.
Click to expand...

No prescription for CBD, at least not in the states
You must log in or register to reply here.

My other dog is infatuated with keeping Tank's eyes clean

And so it continues 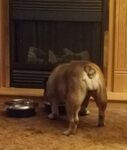 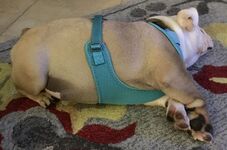