I adopted Rose from a rescue at 5 months old. She had been dumped by a breeder with Parvo. She survived her brother didn't. Two days after picking her up she was shaking, panting and had diarrhea. 1st trip to the ER. She had a fever of 104. They took blood, UA and found nothing. The next day she had an appointment with her vet. He found hookworm eggs and started treatment. Doesn't explain the fever. 5 days later she had blood in her urine. She had urate bladder crystals and ended up finding bladder stones. She saw a veterinary internist and he said she needed surgery to remove the stones. She had her laryngeal saccules removed during the surgery. The surgeon said her palate looked good and no need to do anything. 8 months later she had another bought of shaking and panting. Her temperature at home was 103.5. Back to the ER. Nothing showing on CBC and when they got to her 2 hours later no fever. X-rays showed 3 long objects in her stomach and they wanted to do surgery to remove them. By this time she seemed fine no fever, no panting so I took her home. 6 hours later the panting shaking and fever came back. Took her back to the ER. Nothing found. Even the 3 things in her stomach were gone and this doctor said it could have just been food. 4 days later we were back. This time her fever was 102 and again every test was normal. They gave her fluids and fever went down. 3 days later panting shaking and fever were back took her to her primary vet. Her fever was 104 and he sent me to the ER because she was very lethargic. She stayed in the ICU for 3 days her veterinary internist watched over her care. Tested for tick bourn illness, lupus, Addison's, blastomycosis, chest x-rays, ultrasound. They found enlarged lymph nodes and took an aspiration biopsy which came back normal. Her fever wasn't going down and they finally put her on a steroid which brought it back to normal and she was sent home. I found a new veterinary internist. She rechecked her lymph nodes and again the results were negative. In June (7 months later) it all started again. Once again nothing on and tests were giving us a reason for her fever. Her internist did an ultrasound and found a foreign object in her stomach which ended up being removed through endoscopy. It was a squeaker toy. They also did a biopsy of her intestines because she had started havight boughts of diarrhea. Biopsy came back saying she had IBD. She was in the hospital for 3 days. But still no explanation for the fever. End of August back in the ER with a 104 fever. Tests all good. Gave her fluids and sent her home. 4 days later she woke up from a nap panting. I took her temperature and it was 101. She went back to sleep. I found that she had vomited her breakfast. When she woke up I offered her a treat and didn't want it (a first) a few moments later she collapsed. I grabbed her and took her to the ER. Her temperature was 106.3 and they thought she had heatstroke but she had been in the air conditioning all day. They were concerned with organ failure and admitted her to the ICU. They had her on fluids gave her something for pain because they said during the exam she felt uncomfortable when they pushed on her stomach, and cooled her. Once her temp was down she was eating again. CBC, UA, chest x-ray, several abdominal ultrasounds and once again nothing. She went back in last week after fasting for 18 hours for another CBC and abdominal ultrasound just to make sure they weren't missing something. Everything was good. I am very concerned because it seems like the fevers are getting worse. I was told she probably wouldn't have made it if I hadn't been home the last time. I am 2 hours away from UW Madison vet school and have thought about taking her there but when she isn't going through it she is fine. I have spent over $30,000 and she is only 2 years old. I was told with fevers of unknown origin only about 15% will ever find the cause. She has had every non invasive test done and redone with no answers. I'm afraid to leave her home alone because of how fast she went downhill last time. If you have any thought or ideas Please we need help to figure this out. She has seen no less than 15 doctors including 2 internal medicine specialists. She also saw a cardiologist and had an EKG to check her heart which is all good as well. Sorry for the long post I wanted to include everything hoping someone might have gone through this. Thank you do much!

So sorry I have no experience, but will tag Chip as he or his wife might have insight. @oscarmayer

sending healing pray
You must log in or register to reply here. 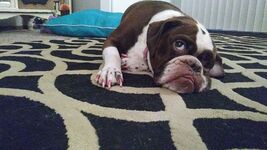 Hives from heat cycle or…?
2